It is fairly hard to look for someone who wishes to be fat, but you’ll find a big deal of people who simply wish to get a slim and toned body.

“Imagine You & Me” Promotes Homosexuals in Lesbian Movie

Written by Larry on January 1, 2020. Posted in Arts & Entertainment

I never imagined there would be a chick flick that I did not absolutely hate. Yes, Imagine You and Me is something that could also spark a male’s fancy. The reason? Well, it is about two very lovely lesbians that find love. Rachel (Piper Perabo) is a recently married lady who becomes good friends with her flower arranger, Luce, of whom was also at the wedding. Luce has always been a comfortable lesbian, and naturally finds Rachel attractive, but Luce does not want to interfere in a married couple’s life. The married couple invites the flower lady on a somewhat informal double date. Rachel was still oblivious to Luce’s homosexuality, and hoped to fix her up with a friend known for his promiscuity. Rachel was eager to hook the flower girl up with a friend. She wanted to make her happy in such a way she only knew. A little too happy. 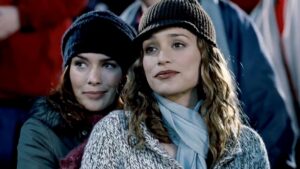 Much to the gentleman-caller’s regret, Luce’s lesbianism is revealed. So another date occurs. A girl’s night. They have their own night out on the town which leads to Rachel having fantasies about the flower girl. These thoughts arouse Rachel, but when she attempts to stimulate similar feelings with lesbian pornography, nothing seems to happen. It is only when she is around Luce, does she lust for a pink center. Unfortunately, the male protagonist is devastated after Rachel confesses her homoerotic urges while the man is in a drunken stupor. The next day he leaves Rachel to pursue her lesbian interest. Though he seems to be a little bit too willing to leave. It’s as though he’s not even too mad that his wife had been lying for so long about her confusing sexuality. Not to mention the fact that the actor breaks the third wall by staring devilishly into the camera after being pursued by a possible future love-interest. What I did find admirable in this flick is that it wasn’t too wacky. That is to say that the comedy is not outrageously unrealistic and unfunny because of it. Most romantic comedies have a tendency of trying too hard to be funny. This was just witty.

In conjunction with this, the parts that are comedic are for the most part, believable. Mostly because the comedic elements are forged in witty dialogue. The dim-witted father was my favorite. The promiscuous gentleman-caller was also great, with his unsympathetic urge to plant his seed while avoiding the standard relationship ceremonies that often come with it. Overall it was a most tolerable movie and I did indeed find myself chuckling at parts. Not to mention that it’s a great way to break the oppressive trends of homophobia by creating a romance that starts out in a standard hetero marriage that eventually forms into a lesbian love story. And I shall not lie; using actresses as ravishing as these to play lesbians that fall in love helps soften the barrier of homophobia. It just seems something that is more eye pleasing. That is not to say that gay male relations are disgusting, but as a straight male, it is much preferable to witness a couple of lady’s get it on. And unfortunately it is the straight male gender that has the largest percentage of people encompassed in homophobia.

Hi, I am Larry, I had been a professional in SEO content marketing for more than a decade and have been training similar people under me with the same professional approach and problem-solving attitude at work.

PICTURES OF THE WEEK

Jesus Jazz Buddhism is a digital news organization that lives up to its mission of providing great contents and articles to its readers across the globe. We believe that journalism and all the things associated with it should be given more importance and value. We are based in New Delhi, India and we’ve been operating for more than 5 years already. If you want to keep up with the latest insights from our website, please register to our newsletters. If you want to know us more, please read our mission and vision statement by clicking the link below.